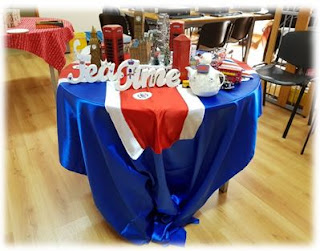 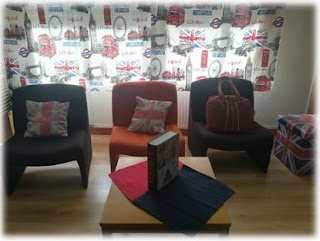 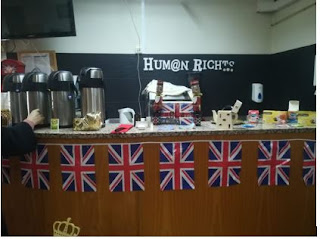 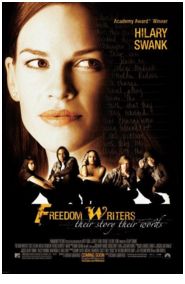 1- Write about the scene in the film that you liked most, that impressed you / surprised    you/ touched you the most…
What is (are) the underlying message (s)?

1- I really liked the scene when the students asked the teacher if she could have Mip Gies visit them and how excited they were about it to the point that they started thinking of things to do to raise money for it right away. It surprised me how dedicated they were to have her come to their school and talk to them about the story of Anne Frank.
The underlying message is that when you really want something, you fight for it to happen.

2- My favourite character is the teacher, Erin Gruwell, because she was very selfless, passionate and a true fighter.
From the first day when she met the kids, she was set on helping them be better students and better people in general. To do that, she worked very hard to teach them in ways that would be more interesting for them, and that would keep them focused.
Also, there were some obstacles that made her work a lot harder, but she didn’t give up and fought with all she had to get what she believed in. She even “lost” her husband during all this, but kept going, which is an attitude of a warrior.
Maria João Silva 11ºA

My favourite scene of the film “Freedom Writers” was the one about the Asian boy’s murder trial where Eva Benitez, one of the main characters and student of room 203, was the main witness. Before the trial, Eva was pressured by her family and fellow gang members to hide the truth about the real murder and lie in court, specially her father, who went to prison to protect his friends. However, she felt guilty for that because the victim was friends with a girl in the same class as her and she knew that the best thing to do was to tell the truth, which would incriminate her boyfriend, who was also from her gang. She felt really scared to talk since she knew that would make her a traitor and she would be persecuted by the other gang members. Eva didn’t know what to do but Ms. Gruwell, her English teacher, told her that we should always do the right thing no matter what, so she decided; she was going to tell the truth, and so she did. After that, the real culprit went to prison, her gang turned on her and her dad stopped talking with her, but, even though it was hard, she did the right thing, earning her teacher’s and classmates’ respect and compassion. From that, we can conclude that the message of this girl’s story is that we must always do the right thing, even if the world is against us.

The character I liked the most was Marcus because he was the one who demonstrated the greatest character evolution. If we were to compare his aggressive attitudes at the beginning of the film to his comprehensive and calm attitudes at the end, we wouldn’t even recognize him as the same person. During the film, he also showed gradually more interest in Ms. Gruwell’s activities, started respecting his teacher and classmates and played a major role in organizing the meeting of Anne Frank’s (protector) Miep Gies, which highlighted his kindness and the importance he gave to education. He also had a lot of courage and love for his family and we can specially observe that during the scene when he decides to go back home and greets his mom, asking her for help to leave the gang’s world and pursue a better life. After hearing his request, she gives him a groceries bag for him to carry home, accepting him, and Marcus takes another bag from his mom and helps carry them both home.
Mariana Sousa 11A

1. There were a couple of scenes that really touched me, but the one that surprised me the most was when Jamal, sitting at the front of the class,  received a paper with a racist drawing on it, after the others saying “Pass to Jamal”. It was a racist drawing because it was a portrait of this boy, but with very big and juicy lips, which is the stereotype for a black person.
The teacher, Ms Gruwell, saw that Jamal was obviously upset with something he had seen in the paper, so she grabbed it, and, she saw it, she was really mad and started giving them a history lesson about a “gang” that also “mocked” another race, until they disappeared. She was talking about the Nazis and the Holocaust. When she was almost finishing her life lesson, a Latino boy, Andres, raised his hand and, when Ms. G. gave him permission to speak, he asked what the Holocaust was. She was shocked and she realized that the students didn’t have the proper education. The only one that knew what the Holocaust was, was the only white student in the class. Then, she gave each one the “Diary of Anne Frank” so that they could learn a little bit more about this terrible period of history.
I think that the message behind this scene is that, sometimes, we aren’t really aware of how bad another person’s life can be.

2.  My favourite character is Marcus. When he was younger, he joined a gang, which led to him being expelled from his house by his own mother. Later, he realized he was wrong, and he missed his family. So, he left the gang and started living alone. The reasons why I like him so much are because he admitted that what he was doing was not good, then he left and changed himself to a better version and he tried to return home. When his mother accepted him, by giving him a bag, he apologized and almost “said” that he accepted the consequences and was ready to return home.

The scene that touched me the most was the one in which Eva asked teacher Gruwell why Anne Frank died in the end of the book. She was angry at Ms. Gruwell because she told them “The Diary of Anne Frank” was an inspiring story since it was about a girl who lived as a minority, during the Second World War, as they were living nowadays.
The message in this scene was said by her classmate, Marcus: that everyone, even the ones that died fighting their battles, deserve a story, deserve to be recognized.
When we talk about these victims of prejudice, we never remember them for their life lives; we just know them as a statistic, as a number, always forgetting they were someone.

My favourite character is Ms. Gruwell. She is a woman who has always tried to learn about other realities that people face and constantly tried to understand her students’ backgrounds.
Ms. Gruwell is passionate about her job. She ended up spending her money and dedicating   all her life to give her students a better education. And most important, she never gave up, not even when she was ridiculed by the other teachers and criticized for her methods, staying even in the hardest times.
Ana Sousa 11A

The film Freedom Writers is a story of an inspiring teacher who was able to turn the Room 203 students, who were always in fights, living among violence, death and lies, into sociable kids, who finally could find peace and felt joy to be with different “race" teenagers. In my opinion this is an incredible movie and there's no favourite scene, because the film is all about respect and integration of different “races" and that is always captivating and present in all the film. There are a lot of touching parts like when Marcus asked his mum if he could come back home and also when one of the students said he had lost his home in the previous summer. For me these were definitely the most touching scenes and they have something in common, they talk about family, being united. But the main message, I think, is the respect to each other and that's what life is all about.
Gonçalo Martins 11C

I believe that one of the most touching scenes was the visit to the Holocaust Museum.
In this scene the students realized the impact that the Holocaust had in people’s lives.
In the beginning of the tour, they received a little card with a name of one of the many “souls” that had been in the labor fields in the concentration camps. Every single visitor, on the way out, passed the card in a machine to learn the destiny of the name in it.
With this activity I think they reflected in all the consequences that their gangs were bringing to the society. After this scene they started to trust and to tolerate each other.
At the end of the day, these are the moments that count, the ones when we find the similarities with the others and we embrace them.
Matilde Carvalho 11C

1. The film Freedom Writers is about the story of teenagers who, due to gang violence and discrimination, saw their lives fall apart. But as it is in every story, there is a hero.
In this story the hero’s name is Ms. Gruwell, a first time teacher who will push her students to respect each other and see the world as a more beautiful place, while teaching English and getting them to know more about people like Anne Frank, who faced dramatic situations similar to theirs.
This film has many emotional scenes, but, the one that touched me the most was when a student goes in front of the class, in the start of a new schoolyear, and reads his diary. In it, he describes how bad he felt when he lost his house and how the room 203 saved him, becoming his new home, because there he was with people he liked, he felt safe and respected and he could escape some outside, very hard problems.
Pedro Carvalho 11C

For me, the film has a lot of important and emotional scenes. It talks about "meaningless" violence, discrimination, tolerance and the key word is respect.
The part that I liked the most was the one in which the teacher asked the students to raise their hands if they knew what the Holocaust was and only one student raised his hand, a white, non-gang member. Then she asked them to raise their hands if they had already been shot or lost a friend to gang wars. Everybody raised their hands, except the previous kid.
This part was really touching, emotional and sad because we can see that they don´t have a life as great part of teenagers of their age do, they don´t have any knowledge about the things that we consider very basic. On the other hand, they had already experienced painful situations in real life out of the school. This shows us that life isn´t easy for everybody, and when we think that our life is bad, we should remember these cases and think about how lucky we are.
Fábio Rodrigues 11C

1. I was really touched with the scene in which Erin Gruwell opened the cupboard and it had a lot of journals inside, the ones she had given to her students some days before.
Ms. Gruwell wanted her students to write on those journals their stories and their fears so that they could be listened and get their worries off their chest. They all accepted the challenge.
As the teacher was reading the journals, she was very surprised with the stories of their lives and so she could better understand her students and what they had faced up.
In fact, this scene and all the film show us that we must tolerate and respect different people, regardless of their race and their culture, since we are one and together we can change the world.
Miguel Almeida 11C